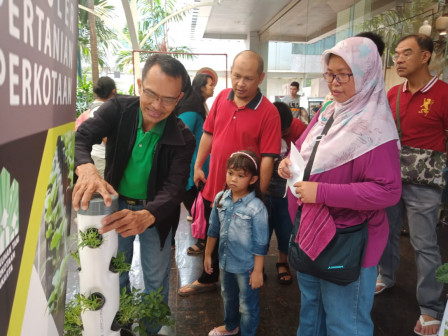 " The officers in the booths are very educative in conveying information, including the matter of urban farming"

The Jakarta residents packed the Balkot Farm booths that enliven the Cultural Creative Market and Tour in Historical Places of Jakarta in the Jakarta City Hall, on Sunday (9/29).

They looked enthusiastic when they heard the direction from the Jakarta Urban Farmers Association (KTPJ) who guarded the Balkot Farm booth.

One of visitors from Muara Karang, Pluit, North Jakarta, Hebi (58) expressed that he visited the event, as he really likes farming.

"The officers in the booths are very educative in conveying information, including the matter of urban farming," he expressed.

"Here I have bought plant seeds and want to try to plant without pesticides," he explained.

There was also another visitor from Kebon Manggis, Matraman, East Jakarta, Nurman. He tried to understand the concept of urban farming after seeing Balkot Farm.

"Using the urban farming concept, everything can become easier in farming. I also like to grow at home, like frangipani, soursop and oranges," he said.

Currently it was still using potting media in farming. However, in the future, he would to implement a hydroponic system as it is more efficient and saves space.

As for the information, the Balkot Farm booth event offers a variety of plant seeds with prices starting at Rp 10,000 to Rp 15,000. Then, there is also a starter kit from a container plant worth Rp 195,000, Rp 15 thousand for organic fertilizer and Rp 15 thousand for rock wool.