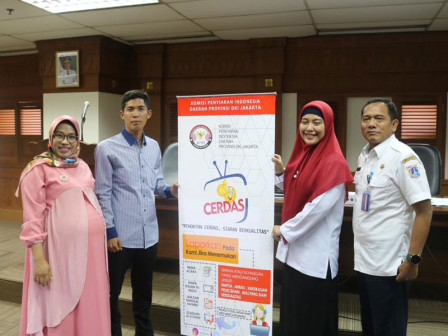 Along with the West Jakarta administration, the Indonesian Broadcasting Commission (KPID) socializes the Smart Audience Movement in order to realize public care about broadcasting and create quality broadcasts.

According to Rizky Wahyuni, Vice Chairman of KPID, the West Jakarta administration's synergy and support is very needed to educate the people until the smallest unit of government.

"The community must be intelligent viewers and ultimately participate in improving the quality of our television broadcasts," he expressed, Thursday (9/26).

One form of synergy ways needed to this socialization is through the Jakarta KPID's complaints banner to the sub-district and urban village offices.

Despite the trend of watching television has changed from conventional to digital, it is undeniable that there are still many people who see television shows only with different platforms.

"They need to be educated to be able to sort shows according to their capacity and quality," he told.

West Jakarta Administration Assistant Yunus Burhan positively welcomed the smart audience education from the Jakarta KPID. He asked all of his staff, especially the sub-district and urban village heads to continue to socialize and educate the public to be smart and wise in watching television broadcasts.

"Our people need to be protected from the negative effects of broadcasts, especially for children and teenagers," he said.