10 Schools in Jambi to Have Smoke-resistant Classrooms 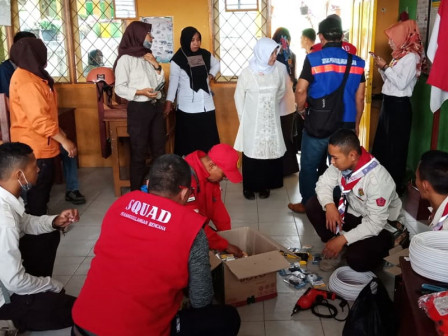 Sooner or later, as many as 10 schools in Jambi will have smoke-resistant classrooms through the Jakarta Integrated Task Force on Forest and Land Fires (TPB Karhutla).

The first classroom will be made in the SDN 216, Kenali Asam Bawah Urban Village, Kota Baru Sub-district, Jambi City.

TPB Karhutla Task Force Team Commander Vitus said he has coordinated with the Pramuka's Jambi Chapter (Kwarda) related with the need for worker aid and securing equipment for smoke-resistant classrooms.

"This morning, it is still in the preparation stage. As planned, there will be three smoke-resistant classrooms made at this school (SDN 216)," he expressed, Wednesday (9/25).

He explained that classrooms would be built in Jambi City, Muaro Jambi District and Tanjung Jabung Timur District.

"In total, we want to make 30 classrooms in ten schools," he stated.