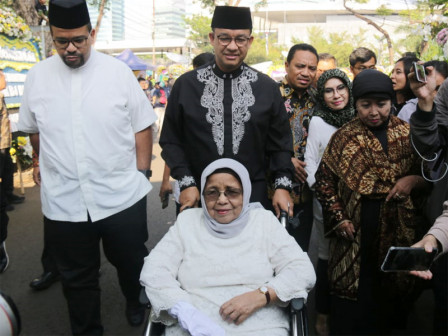 "We do takziyah to the late BJ Habibie after he arrived from Yogyakarta. My mother and him had worked together in scholarship activities for school and college fees. We all mourned his passing," Anies expressed as quoted by Jakarta PPID's press release.

He said that his services are very meaningful in the development of Indonesian press freedom during his leadership through Law number 44/1999 on Press, but also a figure who really cares about the future of the Indonesian people.

Even, because of him, thousands of children in Indonesia could continue their higher education through scholarships, including studying at leading universities in the world to study science and technology.

"Of course we all feel the deepest sorrow. Let's pray that Allah will glorify him and accept his deeds and worship, as well as Insya Allah continues to be an example for us through his knowledge. It will be a relentless diverting reward for him in the next realm," he stated.

For those who want to do takziyah, the Jakarta Provincial Government eliminates odd-even traffic policy on Jalan HR Rasuna Said, Jalan Gatot Soebroto and Jalan MT Haryono. But it will return to effect in the afternoon.

"It has been applied since last night," he stated.