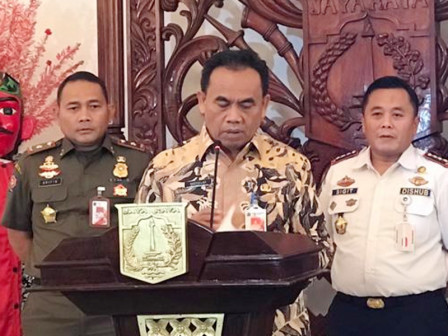 " Moreover, we will pray together and hold tausiyah (broadcast of proselytizing) during the night before new Hijri year"

This information is conveyed by Jakarta Secretary, Saefullah in Conference Press that is held at Balairung, City Hall, Central Jakarta, on Thursday (8/29).

"Moreover, we will pray together and hold tausiyah (broadcast of proselytizing) during the night before new Hijri year," he conveyed as quoted from Jakarta PPID Press Conference.

There is also Halal Culinary Festival during Jakarta Muharram Festival which is located in two locations: Jl. Kebon Kacang Raya and Jl. Imam Bonjol. Visitors can visit these places to enjoy various halal culinary dishes while spending their weekend in Jakarta.

This festival will be hosted by Irfan Hakim, Fadli-Fadlan, Arie Untung, Fenita Arie, and Shara. Popular band groups such as Potret, Wali, Kotak, Koesplus Junior, Kanda Brothers, Jiung Band, and Hijab Band together with Indonesian singers such as Pasha, Opick, Wika Salim, and Takaeda will perform in three stages installed in Bundaran HI.

This event starts from 5 PM to 11 PM with two breaks for Maghrib and Isha prayers that will be conducted together.

Meanwhile, Jakarta Fire Handling and Rescue (Gulkarmat) Department and PAM Jaya will provide 10 spots for ablution that are located on the outermost points of the roads around the stage. Saefullah suggests visitors to bring their own prayer rug thus congregational prayers can run well.

Regarding torchlight parade, his side mentioned that around 2,600 people will bring torchlight from Arjuna Wiwaha Chariot Statue to Bundaran HI from 7 PM to 7.30 PM.

City deploys around 3,700 joint personnel from police and Satpol PP to secure the area during the festival. 303 personnel from Jakarta Transport Department (Dishub) are also deployed to guide road users to follow up traffic engineering applied in several locations due to road closures and traffic diversion.

Road closures will be applied in several points such as on:

2. West side of Jl. Jendral Sudirman (from Dukuh Atas until Bundaran Hotel Indonesia);

Meanwhile, here are traffic diversion that will be implemented:

2. Road users from Jl. Kebon Kacang Raya who want to go to Bundaran Hotel Indonesia will be directed to turn around;

5. Road users from Semanggi who lead to Bundaran Hotel Indonesia will be diverted to turn left (dukuh atas) to go through Jl. RM. Margono Djodjohadikoesoemo.

Thus, Jakarta Government encourages road users to avoid closed roads and diverted roads while obeying officers instruction on the field, follow the traffic signs, and prioritize their safety on the road.

Visitors are also suggested to park their vehicles at IRT Monas, Jl. Imam Binjol, and Plaza Mandiri or use public transport such as Jakarta MRT, Tarnsjakarta bus and Commuter Line to go the festival site.