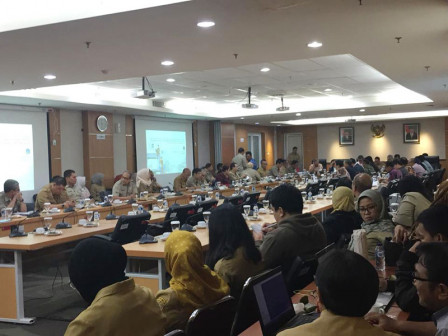 " Before a meeting at council commission, we discuss it first together,"

City DPRD's Banggar Chairman, Prasetio Edi Marsudi said that it was done to explore the proposals of TAPD in the 2019 KUA-PPAS.

"Before a meeting at council commission, we discuss it first together," he stated, at City Council Building, Monday (8/12).

It is proposed due to removal of the activities and made adjustments. For example the adjusted local income from Rp 74.77 trillion in APBD to Rp 74.63 trillion, local expenditure from Rp 80.90 trillion to Rp 77.54 trillion and local financing Rp 6.12 trillion to Rp 2.90 trillion.

While the adjustment of regional revenue was recorded around Rp 11.89 trillion from the target set at Rp 14.31 trillion. In details, the unspent funds (Silpa) in 2018 reaches Rp 9.75 trillion from 2019 APBD stipulation by Rp 12.17 trillion and local loan by Rp 2.13 trillion and is still in the same number position.

"They (TAPD) also had proposed additional by Rp 800 billion for the purpose of Sarana Jaya in case of Zero Down-payment Housing," he expressed.

In the meantime, Jakarta TAPD Chairman, Saefullah will soon coordinate with the regional working unit (SKPD/UKPD) along with DPRD related with technical issues.

"So this is just the beginning and will be re-discussed at the commission level," he told.