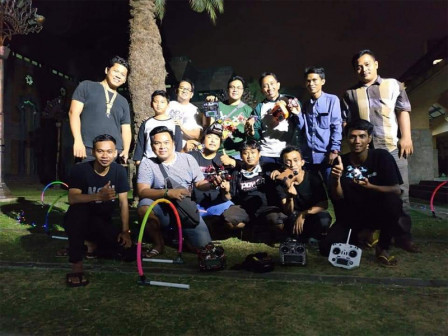 Playing drone becomes a quite popular hobby in Jakarta for the recent years. Mostly, people use it to shoot aerial videos or photos since it enables you to capture unique viewpoints of common subjects. Besides, it makes your videos or photos become more attractive and creative.

" Anyone who is interested to play and learn how to fly drone with us, can visit this place during our training hour"

Drone is unmanned aircraft that can be controlled using remote control. Not all people can fly drone easily at first since it needs skills to control it. If you are interested to play drone or learn how to control it, there is a community for drone hobbyist in North Jakarta that you need to know!

"We are here to help drone hobbyists to know more about drone and how to fly it well, starts from flying it up and down, then left and right," he added, Wednesday (7/10).

According to him, drone can be divided into three main categories: micro, mini, and aerial drones. Micro drone is the safest to play than mini and aerial types because it has propeller guard that makes it not too dangerous to people and drone's body can be protected from impact. Besides it is very easy to control.

"We use micro drone since it is the safest," he asserted.

At first, this community had 6 members and now it becomes 25 members. They are routinely gathering at Jakarta Islamic Centre on Sundays at 4-6 PM to train their skills in flying drone.

"Anyone who is interested to play and learn how to fly drone with us, can visit this place during our training hour. It is free. Don't worry, even though you doesn't have drone, we are still welcoming you," he conveyed.