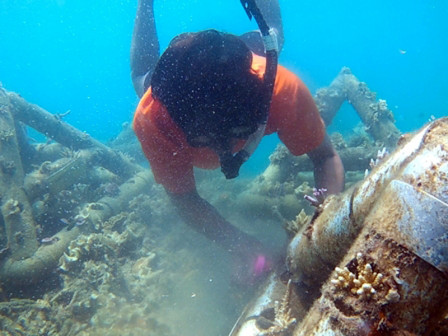 A snorkeling spot which is close to the mangrove pier on north side of Untung Jawa Island, South Thousand Islands is very favored by tourists to see and meet the clownfish made famous in the movie Finding Nemo.

According to Syaifudin Boska, Creator of Untung Jawa Island Clownfish Snorkeling Spot, it was created in 2018 by breeding sand and clown sea anemones, which are the home of clownfish.

"We'll be spoiled by the beauty of the sea and 30 clownfishes which are bred with the clone system," he expressed, Monday (4/1).

Surely it gets an appreciation from Untung Jawa Island Urban Village Head, Supriyadi. He said, it was also realized over the role of locals who help to create new spots in developing tourism sector on his region.

"Hope it can attract more tourists to visit here," he hoped.

He also reminds tour guides to share education while snorkeling and do not touch or damage anything, either it is coral or fish.

Similar statement also said by South Thousand Islands Sub-distirct Council, Robin who said that it was not separated from the participation of the Thousand Islands Regency and the related regional working unit (UKPD).

"So I hope synergy between citizens and government is a solution for improving the economy and welfare of citizens," he uttered.