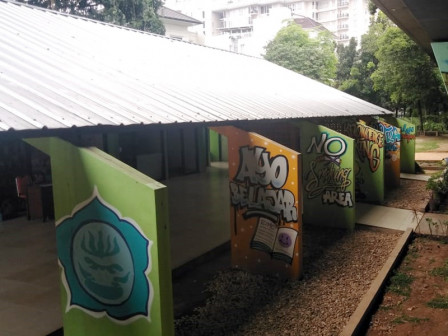 The mural and graffiti artists who are members of the Gardu House Region Community vent their creative work in the Gondangdia Child-Friendly Integrated Public Space (RPTRA), Menteng, Central Jakarta, precisely under the train overpass.

" We finish our work for one day, last Saturday"

Based on beritajakarta.id, the park becomes more colorful and eye-catching. Moreover, they give a moral message, which is easily understood by kids.

"We finish our work for one day, last Saturday. We involve eight members to do it," he expressed, Monday (3/11).

It is part of the Jakarta Invasion activities along with public space artists from various regions.

"We also present painters from Bandung and Yogyakarta," he told.

Besides the three pillars of rails, it is also carried out on a number of RPTRA building walls.

"Our theme is very customized thus easily understood by kids like, studious and concerned about the environment," he said.

Gondangdia RPTRA Caretaker, Diana expressed that the action is very appreciated, as the park aesthetics are becoming more attractive.

At the same time, Gondangdia Urban Village Head, Harry Ananda and his ranks are ready to provide a pace and facilitate them in creation.

"We surely support them, as long as its aim is positive," he stressed.