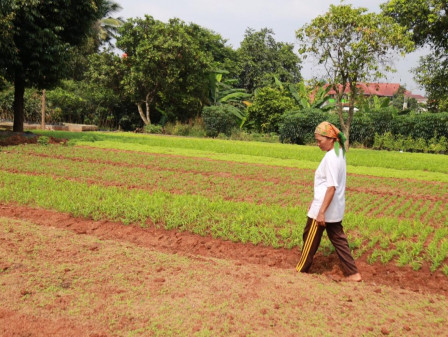 " Government gives us permission to grow plants in this area"

Fatmawati (52) is one of the farmers who also lives in RW 05 Ciganjur Urban Village. She has started farming vegetables since three years ago. She and her friends plant different vegetables with relatively short harvest season such as morning glory, spinach, kenikir (cosmos caudatus), chili pepper and sometimes alternate it with other vegetable crops such as long beans and cucumber.

"Government gives us permission to grow plants in this area. We usually plant morning glory and spinach which can be harvested once per month. In the other hand, long beans and cucumber take about six months to be ready for harvest," she explained, Saturday (3/9).

After harvesting, she usually takes some for herself and sells the others. She sells a bunch spinach with price Rp 600, while cucumber and long bean are depending on market price or between Rp 2,500 and Rp 5,000 per kilogram.

"It's not bad. I still can use the money for household needs," she conveyed.