Up to September, 1,161 UKM Licenses Issued 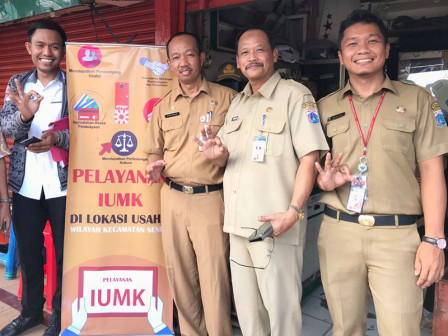 (Foto : TP Moan Simanjuntak / Beritajakarta.id)
Along January until early September 2018, around 1,61 documents of UKM have been issued through the Urban Village PTSP Executing Unit.

" 608 UKM's businesses incorporated in OK OCE have been issued"

Jakarta One-Stop Integrated Services Investment Dept. (PMPTSP) Head, Edy Junaedi stated that 608 or 52.4 percent out of them are UKM entrepreneurs who participated in OK OCE training.

"608 UKM's businesses incorporated in OK OCE have been issued. That means they will be facilities in processing UKM licenses. If all documents meet the procedures, it will finish within one day," he expressed, Monday (9/10).

He asserted that it is a form of to the creation of a conducive business climate, as well as encourage the UKM empowerment systematically, independently and sustainably through the business licensing policies.

"The highest number of UKM licenses issued in Seribu Islands is 255 UKMs, with 480 workers and a total investment value of Rp. 3.7 billion," he concluded.