Anies Wants Elders to Be Facilitated 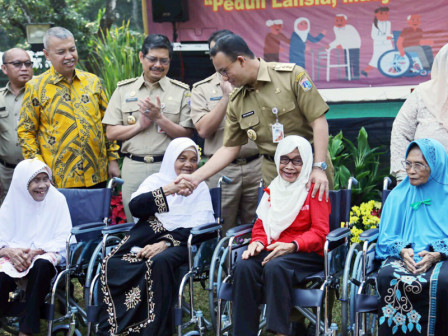 " They are actually active but needs to be facilitated"

In this chance, he asked his subordinates to facilitate and invite elderly in various activities.

"We should see these elders as a productive society," he stated on the location, Tuesday (7/24).

According to him, elders can have a space to share their experiences by inviting them in various activities. Thus he wants his subordinates to facilitate elders to continue being productive.

"Don't see these elders as passive people. They are actually active but needs to be facilitated," he added.

He considered, elders experiences can be learned as life lessons for young generation.

"What we do not have from the parents is wisdom. So give us lessons and experiences so we can be wise," he conveyed.

KLJ holders are Jakarta elderly people who have registered and set in Integrated Database (BDT) on deciles with the lowest economic status or decile 1.

He explained, current number of elderly who get KLJ in Jakarta reaches 14,520 people. Each KLJ holders get Rp 600 thousand per month. KLJ aid has been given since April 2018.

"They must be registered in BDT in order to get KLJ," he informed.

In this event, his side also provides physical aids from Social Ministry such as wheelchairs, hearing aids, and canes.

"It is including 1,000 staple food packages and health service from Rumah Yatim and 300 eyeglasses from Yayasan Surya Kebenaran Indonesia," he stated.