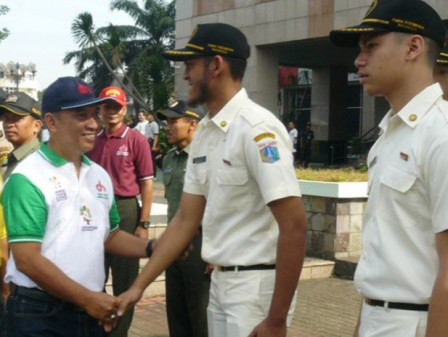 4,290 South Jakarta residents will participate in Torch Festival on July 1 ahead of Asian Games XVIII.

In this festival, participants will run from sub-district to urban villages by carrying torch replica.

South Jakarta Sport and Youth Sub-dept. Head, Eko Pudjiharyanto said, torch replica will be brought along in the run that will be run simultaneously in 10 sub-districts. Participant will run from each sub-districts and go around to its urban villages.

"Every urban villages have one team consists of 11 people. So, there are 4,290 people who participate in this event," he mentioned, Wednesday (6/27).

He explained, every participants in each urban village will run for three kilometers to the next urban village. These participants consist of local residents, public figures, RT/RW administrators, karang taruna (youth organization), students, FKDM, and others.

"Participants are taken from each urban villages. It is done to enliven Asian Games event that will soon be held," he stated.

According to him, this event has been planned last week by Jakarta Vice Governor, Sandiaga Uno in Setu Babakan. This Torch Festival is hoped to ignite Asian Games fever in Jakarta.