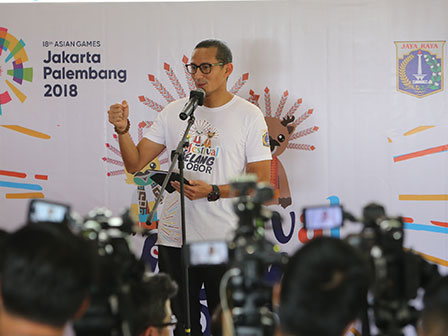 Jakarta Provincial Government is going to hold the 2018 Asian Games Torch Festival in five cities and Seribu Islands that include 44 sub-districts and 267 urban villages on July 1-5, 2018.

Through theme "Inviting Jakartans to Welcoming and Enlivening the upcoming Asian Games", the festivals in South Jakarta and East Jakarta will begin on July 1.

The next is in West Jakarta and Central Jakarta on July 8, as well as in North Jakarta and Seribu Islands on July 15.

Jakarta Deputy Governor, Sandiaga Uno expressed it becomes one means of promotion and socialization of the Asian Games that will take place in August.

"This is expected to be felt throughout Jakarta and other regions in Indonesia," he stated, during press conference of Asian Games Torch Festival, at Setu Babakan Betawi cultural village, Jagakarsa, South Jakarta, Saturday (6/23).

In the festival, there will be a replica of the torch that will be brought running in each urban village by six runners. In addition to athletes, it will involve public figures, outstanding citizens, and students.

"This is a collaborative participatory approach as the Governor desires. We are collaborators of the people that will be part of the Asian Games," he explained.

He added, Asian Games is a large international event that can be an opportunity to promote the tourism sector and can also be able to grow the economy.