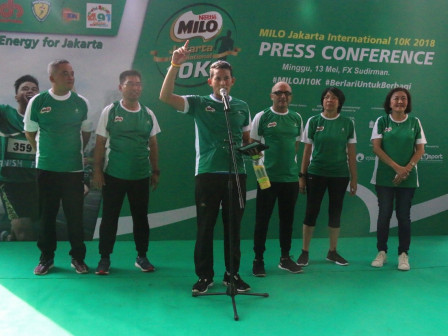 Jakarta Deputy Governor, Sandiaga Uno kicks off Milo Jakarta International 10K as a marker of the official launch of the international run race.

As planned, the event itself will be held on July 15, 2018. It is targeted to attract 16,000 participants to welcome the forthcoming city anniversary.

From 16,000 participants, his side now only needs 800 more participants. The public interest itself is pretty high to participate, either it is from domestic or foreign.

"It also aims to celebrate the city anniversary," he stated.

This year, it will be held in Rasuna Epicentrum area, Kuningan, South Jakarta. While for the number of family run this year is also improved from 1,000 become 1,500 families.

In the meantime, PT Nestle Indonesia President Director, Dharnesh Gordhon uttered his side has been the sponsor of Jakarta International 10K. He is also committed to contribute to make people healthier.

"Registration is done by online that has been ongoing since April 24 and will end on June 29," he stated.