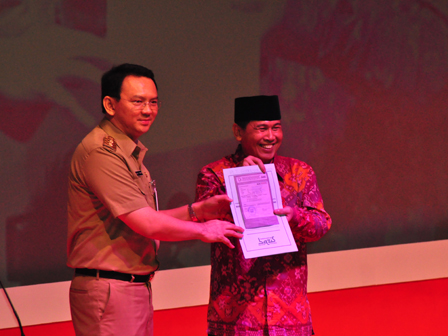 On that occasion, the activity was also attended by officials serving under Jakarta Provincial Government and direction of Jakarta Regional-Owned Enterprises (BUMD). They also gave alms through Jakarta Bazis.

"This thing that I took from religious advice (tausyiah) from a kid that I met. We're like a pipe, if the pipe is corroded and its water clogged until causing rotten smell. But if the water flows, its quality will be good. Principally, every religion has a god. If you hold it, you will be blessed and rich," he expressed.

He also tells his life experience when his father died, leaving a lot of debt. Yet the time was proved, he and his brother (Regent of East Belitung) could become official. This can be achieved because of their life has bestowed blessings thus what has been given to the needy, it will be replaced with double.

"I intend to talk like this because of the officials' contribution is still lacking. If Muslims give 2.5 percent, called as alms, and Christians also give 10 percent, but I guess it's still lacking. Yet there are many Muslims also giving 2.5 percent. If all privileged people give alms in large quantities, there would be no underprivileged people in Jakarta. All will be solved," he said.