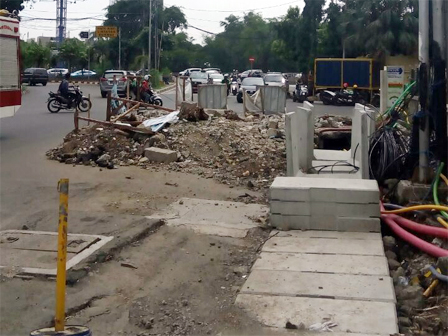 Normalization of water channel as long as 850 meters at Jalan Tanjung Duren, Grogol Petamburan, West Jakarta continues to be accelerated. It is carried out to overcome inundation that often occurs every rain.

"The channel will be made up to 850 meters long from Gendong River until in front of Mediterania Apartment. It's able to minimize inundation," he stated, Tuesday (11/21).

He added, recently the inundation that is often detected at some roads of Grogol Petamburan can already be solved, thus can recede fast.

Grogol Petamburan Sub-district Head, Ahmad Sajidin asked local residents to be patient during the normalization of the channel along Jalan Tanjung Duren Raya.

"We keep coordinating with related units not to ignore the excavation work on the roadside to avoid narrowing," he closed.