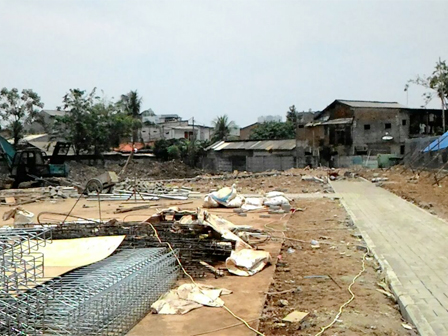 Sunter Agung Urban Village Head, Andi Dirham has filed an empty land in RW 05 used as a shelter for street vendors (PKL). Currently the land is being dredged by local urban village.

" The rest land will be used to accommodate PKL. We coordinate with North Jakarta KUKMP Sub-dept. for the placement of PKL"

As quoted by Beritajakarta.id, Friday (9/29), the waste disposal site and illegal hut on the land are being dredged using one unit of heavy equipment. The dredging material is taken from the excavated land of RPTRA development at RW 05 Sunter Agung, which is located nearby.

"The rest land will be used to accommodate PKL. We coordinate with North Jakarta KUKMP Sub-dept. for the placement of PKL," he stated.

According to him, PKL who can enter are those who usually sell on the roadside. Particularly those who near the intersection of Jalan Sunter Jaya I and leading to Sunter Selatan Reservoir.

Related to the matter, North Jakarta KUKMP Sub-dept. Head, Arfian revealed, he agreed with the plan. His sub-dept. will also conduct guidance on the PKL who enter the shelter and become the guidance.

"We appreciate and respond positively to the plan. We will guide the PKL in shelters location and they will make payments via autodebet," he closed.