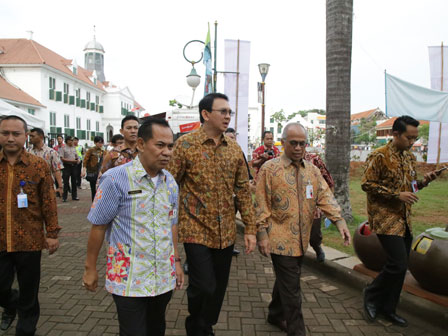 As many as 100 street vendors in some guidance and temporary locations in the capital are given credit by Bank DKI. The credit signatory was held at Ceramics Museum, Kota Tua, West Jakarta attended by Jakarta Governor, Basuki Tjahaja Purnama, Friday (12/18).

" The credit distribution cooperating with PT Jamkrida is the second time"

According to Sediarsi, low class vendors all this time experience difficulty to get credit from bank. Such condition is caused by the high of Non Permorfing Loan (NPL) in this informal sector.

"The credit distribution is through data of Micro Small and Medium Enterprises Cooperative Department and the retribution payment character debited at Bank DKI. From there, it could be decided whether the vendors can get the credit or not," he explained.

His side, he continued, will also interview street vendors who apply for the credit to determine credit payment system  will be done.

"We don't give limitation how many street vendors get the fund. We afford it, even Mr. governor just told will channel the fund to Bank DKI thus automatically we will decline the loan interests rate for low class vendors," he expressed.

He is optimistic the credit aid will run smoothly. "If the credit is stuck, we will bill it. As we have the vendors' ID Card and known their home address," he disclosed.