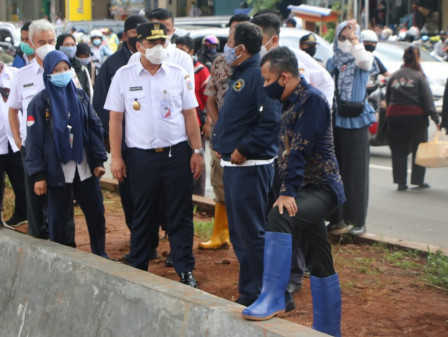 Jakarta administration is working to mitigate and prevent flooding in the capital city that followed by the recent heavy rains. One of them is through the construction of retention ponds, locally known as kolam olakan in regions that are prone to flood.

Jakarta Vice Governor Ahmad Riza Patria revealed, it is hoped to be a concrete step in overcoming floods in Jakarta. He stated it when he monitored the construction of a retention pond on Jalan Boulevard Raya, precisely under the LRT track, Kelapa Gading, North Jakarta, on Wednesday (1/27).

He saw one unit of heavy equipment, 1 unit of dump truck, and 22 personnel of blue troops at the location. He ensured that the work would run well and optimal, as well as according to the plan.

"Today I'm visiting several flood points. Our effort is making retention ponds like in Kelapa Gading and in almost all areas of Jakarta. In Kelapa Gading, there are 11 ponds that we make. We'll flow the water into the river and then continued to the sea," he expressed, as quoted by Jakarta PPID's press release.

"Alhamdulillah, until today, we are still grateful to be able to control floods, which should be seen from the high rainfall discharge in recent weeks," he explained.

"In future, it will be further intensified from 8 hours to 16 hours in a day. Hopefully we can have a higher capacity," he uttered.

It was also supported by making sodetan (crossing channel) in order to control the movement of water, including normalization, naturalization, as well as preparing stationer pump and mobile pump. This is what we do as much as possible," he asserted.

Thereby he urged the public, especially in Jakarta to participate and collaborate in flood control efforts. "Let's be more disciplined, not throw trash carelessly. Make sure the gutters near your house functioning properly and clean. Help us by making infiltration wells in your own homes thus Jakarta can be better and free from flooding," he stated.