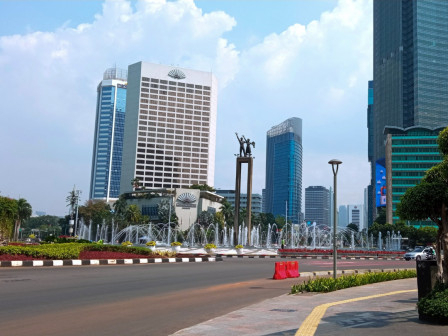 Jakarta Environmental (LH) Agency claims the air quality in Jakarta is better in the afternoon. It is based on the results of monitoring from five air quality monitoring stations (SPKU) managed by the agency.

" This is influenced by meteorological factors "

"This year our monitoring shows that the hourly mean concentration of PM 2.5 in 2020 is still below the required quality standard of less than 65 ug/m3. Moreover, in the afternoon, the PM2.5 concentration was even lower," he told, Thursday (11/19).

He explained, the PM2.5 concentration in the afternoon tended to be lower than at night, despite air pollutants generally appeared more during the day.

"This is influenced by meteorological factors in which the air temperature will be higher during the day, low air humidity and relatively higher wind speeds will cause turbulence and the dispersion of pollutants in the air. Thus the pollutant density, especially PM2.5, is reduced," he explained.

In the meantime, during the early hours of the dawn until the morning, when the conditions of low air temperature, high humidity, and relatively low wind speeds are not as big as during the day, it will cause pollutants in the air to be more difficult to disperse and stay longer on the ground thus the concentration of pollutants will be higher than during the day.

He added, in the morning, the pollutants in the air are right within the range of human breathing thus the possibility of breathing polluted air was even greater.

"The afternoon is the best time for outdoor activities," he told.

Despite the air quality in Jakarta was still suitable for outdoor activities during the day to night, the source of pollutants should still be addressed.

The city continues to implement policies that could reduce pollution from its source, among others by conducting vehicle emission tests and other policies as stated in Governor Instruction number 66/2019 on Air Quality Control.